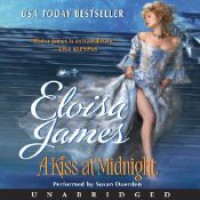 It's odd that I was so annoyed by the gaps in logic in the book that I had just finished The Bridge, but mostly gave it a pass with this one. Because there were plenty of plot holes, logic gaps, and absurdities here. I could overlook them partly because the author set it up explicitly as a fairy tale, but partly because the story was just plain old entertaining.

Audiobook, borrowed from my public library via Overdrive. Excellent performance by Susan Duerden.

I read this for the 2017 Romance Bingo, but haven't decided yet which square. It could fit the following:

TSTL: Because the step-sister is, and the main character certainly seemed to be at times.

Regency Romance: It would be a stretch though, since the author made no effort at historical accuracy

Eyeshadow and Heaving Bosoms: because just look at the cover

Virgin Best First Time: He had the magic peen

Blown Away: Again, the cover. She looks like she's about to be blown tumbling into the ocean

And one other, TBD, because it would be a spoiler.