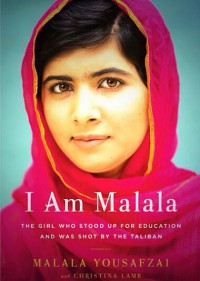 I'm getting started with I Am Malala: The Story of the Girl Who Stood Up for Education and Was Shot by the Taliban, which can fit both Square 10: World Peace Day (Malala Yousafzai was a co-recipient for the Nobel Peace Prize in 2014) and Square 14 Quaid-e-Azam (she is Pakistani and much of the book is about and takes place in Pakistan) for The 16 Tasks of the Festive Season. I haven't decided yet which square I'll use it for, since I don't have any alternatives for either yet. I don't have any books about any other Nobel Peace Prize winners, and my library has some unappealing options, mostly children's books. Square 10: December 21st: World Peace Day is the day the United Nations General Assembly has declared as a day devoted to strengthening the ideals of peace, both within and among all nations and peoples. Book themes for World Peace Day: Read a book by or about a Nobel Peace Prize winner, or about a protagonist (fictional or nonfictional) who has a reputation as a peacemaker.

Book themes for Quaid-e-Azam:  Pakistan became an independent nation when the British Raj ended on August 14, 1947. Read a book set in Pakistan or in any other country that attained sovereign statehood between August 14, 1947 and today (regardless in what part of the world).