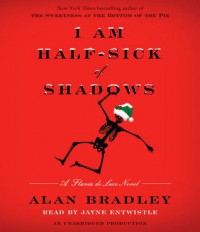 I’ve been in a reading funk lately, trying to read some holiday themed books to put me in the Christmas spirit and finding myself left more Grinchy than jolly by the experience. So I decided to take a break from the holiday stories and get in some light entertainment in the form of my favorite little scamp, Flavia deLuce. Only to find that the next book in the series is… set at Christmas! In retrospect, the cover art featuring a dancing skeleton in a Santa hat should have been a dead giveway, but I can only plead inattention due to upper-respiratory infection.

In this installment, the deLuce family finances has forced them to allow a film crew to invade their ancestral home, while Flavia has decided on an empirical approach to determining whether Father Christmas is real, by cooking up a sort of people version of fly-paper in her chemistry lab to slather around the chimney. Meanwhile, there’s a murder, and Flavia is her usual delightfully obnoxious self in disrupting the official investigation and ferreting out the clues.

Audiobook, purchased via Audible, with another fantastic performance by Jayne Entwistle.