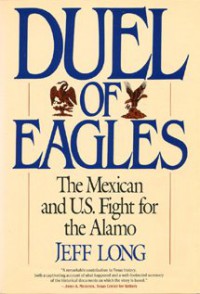 I'm LOLing just about every other page at how different this is from what I learned about the Texas Revolution at school:

Many of the men pulling together at Gonzales had little or no idea why they were fighting. "I cannot remember that there was any distinct understanding as to the position we were to assume toward Mexico," said Smithwick. "Some were for independence; some for the constitution of 1824; and some for anything just so it was a row. But we were all ready to fight."

These supposed great war heroes that we were taught to venerate in school resemble more the participants in a spaghetti western barroom brawl, per this book.