I struggled between giving this book three or four stars. It was inventive and imaginative. The pacing was excellent and I gobbled it up in only a couple of days in spite of having to work my full time job and read around a couple of baseball games. And yet... it was oddly emotionless reading. Entertaining, but not really engaging. This is the first book I've read by this author, so I don't know if this is his normal style or if he was trying to imitate a classic fairytale style, but that's how it worked for me. He tells us that characters are feeling emotions, but I don't feel it or feel a particular empathy with them. For example:

"No!" cried David, and although he was overcome by rage and sadness, he somehow found it in himself to begin running again..."

He stood upright in his red trousers and his white shirt, staring at David with undisguised hatred. He raised his head and howled for the lost members of his pack, but he did not leave. Instead, he continued to watch David until the boy at last left the bridge and disappeared over a small rise, crying softly for the Woodsman who had saved his life.

Also, I get the impression that the author doesn't like women very much, as the monstrous characters are almost all women. His version of Snow White and Seven (actually Six) Dwarves was pretty hilarious, though.

First edition hardcover, which is really disappointing, because despite the gorgeous cover art and decorative chapter openings and interesting font choice, it's badly printed. The paper is cheap and thin and there are several pages where the ink is smeared across the page as though someone neglected to clean the rollers. This one will go into my donation pile. 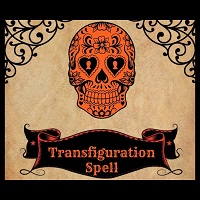 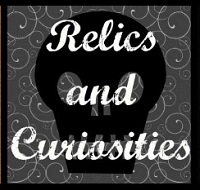 I read this book for the Booklikes Halloween Bingo 2019, for the square Relics and Curiosities: Concerning magical, supernatural or haunted objects, such as spellbooks, talismans or swords.  It has whispering books, magic portal trees, and a talismanic beast claw. I used my first Transfiguration Spell on the Fear Street square. It would also fit the squares for: